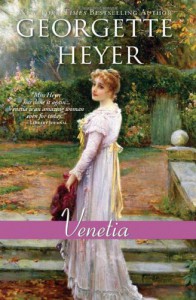 I'm probably ahead of some of you - I finished Venetia last night. I read this charming book before, of course, a couple of times, as I read every other Heyer’s romance novel, and my old review is here. Even though I wrote it 4 years ago, I stand by every word (*). So here are just a few notes to add to that review.

I like Venetia, the heroine. I admire her. She fights for her happiness, sometimes using unconventional methods, and disregards the rigid morality of her times and the disapproval of her righteous neighbors. Some people don’t think her character typical to the regency era and they are probably correct. But I read Heyer not because I want historical accuracy but because I enjoy her heroes’ madcap escapades, because I’m entertained by their banter and love stories, and Heyer is incomparable in delivering that.

The other characters are a bunch worthy of a vaudeville stage. Lord Damerel, the hero, is dark and brooding, a dissipated, bored man who unexpectedly finds love. His just rewards, I’d say. He is the only character transformed in this book, changed by his love for Venetia, so in many ways, it is his story, not Venetia’s, who is the titular character.

She doesn’t change in the novel, but her charismatic personality, her kindness, practicality, and wit, and her readiness to laugh at the absurdities around her make her so attractive, I’m almost in love with her myself.

Edward, “the worthy suitor,” is such a pompous ass, I’m surprised Venetia contemplated marrying him even for a moment. He is also very life-like. I knew a couple of men like him, and one even courted me. I didn’t marry him and was never tempted, but some silly, weak-minded woman would be happy with him. As long as she never doubted his judgement, of course.

Aubry, Venetia’s brother, is the exact opposite, a young man of brilliant, overwhelming intelligence and non-existent social graces. I like him very much, sharp tongue and all, but then I’m partial to smart guys. I like him more than Damerel, and Edward is not even in the running for my affection.

A few female secondary characters round up this farce of love and manners, and Mrs. Scorrier just adds a bit of tartness, so the whole rigmarole isn’t cloyingly sweet.

A few words about the first meeting of Damerel and Venetia. It offended some of your sensibilities, folks, but it didn’t offend mine. I don’t see a problem there. Venetia is 25 and never been kissed, not really. She wants it: kisses, petting, and the rest. Despite her healthy respect for propriety, she is ready for sex. When Damerel ‘assaults’ her, she likes it. Sure, the impertinence of his actions anger her, fleetingly, but deep inside, she enjoys his touch. That’s why her reaction is organic.

Afterwards, she frets about him. She wants to see him again. She wants a repeat of that kiss and more. She is a rare person, honest with herself at all times, and she knows her own mind. She doesn’t indulge in self-delusions and has no patience for those who do. This one trait of her personality raises my estimation of her even higher than all others.

My overall impression of this book: it was amusing and totally pleasurable. I savored it all: the characters, the plot, and the food.

I stated before that Heyer includes mouth-watering feasts in almost every story of hers, and I’m tempted to provide a proof. Here is a quote:

“Veal, my lord, with a sauce Bechermell—Mrs. Imber not being prepared for company,” replied Imber apologetically. “But there is the raised mutton pie, and a brace of partridges for the second course, with French beans and mushrooms, and—and a dish of fruit, which Mrs. Imber hopes you will pardon, miss, for his lordship not being partial to sweetmeats, she hadn’t a cream nor a jelly ready to serve, and, as you know, miss, such things take time.”

Don’t you wish to partake of this meal alongside Venetia? I do. I’ve never tried partridges with French beans and mushroom.

(*) I imported this review from GR with all my books, when I opened my account on BL. It’s somewhere here, but as BL doesn't consider the imported reviews as parts of the blog, I have no way to find it. That’s why my link is to my GR review of this book. Something BL should probably view as a bug that needs fixing.

Addendum: Here is my original review on BL. Murder by Death found it for me. Thanks, Murder.