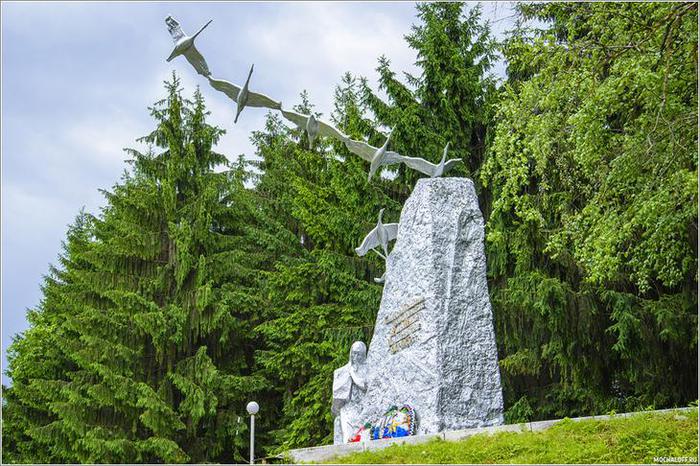 During the WWII, seven brothers went to war from one small village in Dagestan, in the Caucus Mountains. None returned, and the parents didn’t survive seven death notices. In 1963, almost 20 years after the war, the village put up an obelisk to commemorate the fallen: a grieving mother and seven cranes flying away. Famous Soviet poet Rasul Gamzatov, a Dagestan native who had also fought in the war, visited the monument. Inspired by it, he wrote a poem about slain soldiers turning into cranes. He wrote it in his native tongue.

After it was translated into Russian, composer Jan Frenkel wrote the music, and the poem became a song, one of the better known songs about the war in the Soviet Union. It was first performed in 1969 by Mark Bernes, a very popular singer in Russia in those days.

To mark the day of May 29 – the day people remember those who died in wars – I attempted my own translation, this one into English. I tried to keep to the rhyming scheme and meter of the original poem. Of course, it is not nearly as good as the Russian version, but I wanted to share with you, and this was the only way. Here it is.

I think sometimes that every fallen hero

Does not dissolved into earth-bound zero

But turns instead a white and graceful crane.

Forever since that fateful mortal moment,

Cranes soar on the winds and call to us.

Until we hear their wistful sonnet,

And gaze in melancholy, as they pass.

Through day and night and sun and misty rain.

But empty spot unfolds between the flyers.

It is for me, when I become a crane.

One day I’ll fly together with my comrades

Beneath my wings, the heavens blue and kind.

And I will call from up among the clouds

To everyone I loved and left behind.

You can watch and listen to the original recording from 1969 here.