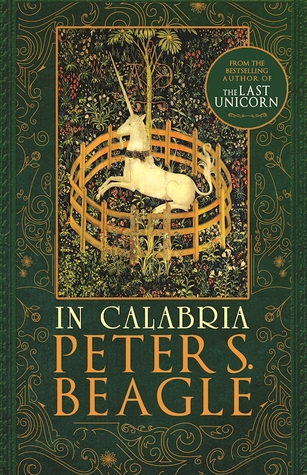 Note to librarians: Unfortunately, this book is not in the BL database, so I can't put it on my shelf. I'm using the cover from GR.

Unicorns come to Calabria. Not once upon a time in an imaginary land, but now, in the 21st century, a beautiful unicorn comes to a run-down farm on a hillside in Calabria, South Italy, and settles in. The farm owner, a lonely hopeless man, shuns the technology of his times. He ekes out his meager existence from the land and takes care of his few animals, when he witnesses the miracle of the unicorn. The strange, un-earthy creature gives a new meaning to his life, opens his eyes and his heart, and in return, he is willing to protect it from the unicorn hunters, the insatiable media, and the ruthless Mafiosi.

The story reads like poetry, lyrical and dreamy. It’s not a fast-paced fantasy adventure but a slow-flowing feast of words, and despite my preference for quick action of the usual sword-and-sorcery pageant, I couldn’t stop reading it from start to end. Fortunately for me, it is a short book, 174 pages, but it is one of the best books I’ve read recently. It left me oddly happy. Even though I have never seen a unicorn, I felt as if its magic brushed against my skin too, just as it did for the protagonist of this unusual tale.