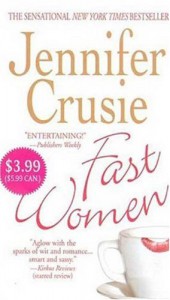 I love this writer. I’ve read everything she published and I subscribe to her blog. This re-read (it was originally published in 2001) gave me enormous pleasure and induced several laughing fits.
The story starts with the protagonist, Nell, coming to a job interview. She is a divorcee, still reeling from her husband’s betrayal after their 22 years of marriage. Her interviewer and potential employer, Gabe, owns a PI agency and he needs an office manager.

He picked up her resume. “Why did you leave your last position?”
“My boss divorced me.”
“That would be a reason,” he said, and began to read.

The traditional start to this romantic caper is a camouflage. The story unfolds like a crossroad, leading in several nontraditional directions at once, all interlinked by their inventive creator, Crusie. It’s a comedy, so funny at times I couldn’t read because I laughed too hard. It’s a thrilling mystery with a number of frozen corpses, hidden boxes, and mysterious villains. It’s a story of female friendship and collector china. And above all, it’s a love story: it explores how love starts, how it matures, and how it ends.
Both protagonists, Nell and Gabe, are strong, assertive people. As they go about their day-to-day business: managing office or investigating clients, they fall in love. But love is not enough for a successful union, not for them. A couple must learn to compromise, to respect each other and accept each other’s foibles. And they both are old enough to know it.
To the reader’s delight, the process of such learning for Nell and Gabe is crammed with distractions: an embezzling former employee, YA children and former spouses, old family secrets and friends with marital problems.
This marvelous romp of a novel is written beautifully. About 80% of the text is dialog, and Crusie is definitely a master of dialog. Her snappy and hilarious one-liners or involved and smart verbal expositions propel the plot forward so swiftly, the reader gets a moving sickness just by keeping up. The story twists and turns and whirls around, and the reader can’t close the book until she knows what’s behind the next bend.
The little quote above is just a small snippet of the writer’s clean and witty writing style. There were so many other quotes I wanted to include they wouldn’t fit in a regular size review. I ended up including none of them. Read the book instead.
One of the subplots concerns Nell’s friend Suze and her collection of Carlton Walking Ware egg cups. The concept was intriguing enough that I Googled it. Below are a few pictures of the walking egg cups – they are real, alright. Quirky too, just like the story. 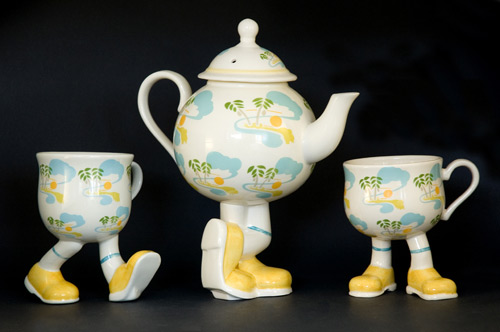 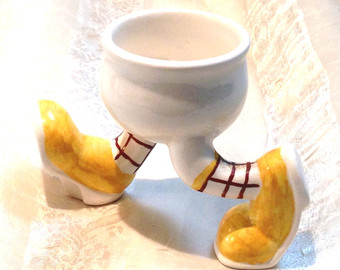